You are here: Home > Things to do > The Battle Tapestry 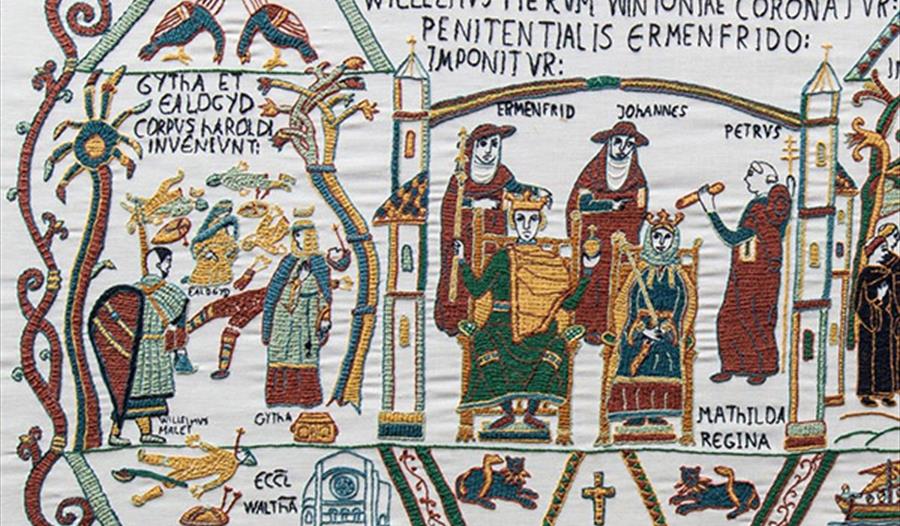 Introduction to the Battle Tapestry

Tina Greene conceived and designed the Battle Tapestry as a 3 metre long depiction of how the town of Battle might have developed after the Battle of Hastings on 14 October 1066, to the founding of St Mary's Parish Church in 1115. She wanted the design features to be in the style of the Bayeux Tapestry and to use the same wool colours and embroidery stitching methods on a linen base. She drew heavily for these techniques on the book by Jan Messent , ‘The Bayeux Tapestry Embroiderers’ Story’ .

The selection of the eight scenes to be used was made after discussions about the relevant histories with local Battle historians Keith Foord and Neil Clephane-Cameron.

Following an inspirational meeting with the creators of the Alderney Tapestry, Tina decided that the Battle Tapestry should be undertaken as a community project, which was then started in March 2016. After 10 months of intensive effort with contributions from 741 registered stitchers (men women and children), who not only came from Battle and Rother but from the rest of the UK and abroad, the tapestry was finally completed in January 2017. She noted that people had been incredibly generous with their time and effort, and that a real community spirit definitely developed and new friendships made.

The tapestry was unveiled by the Lord-Lieutenant of East Sussex, Peter Field, on 31st May 2017 and is now on permanent display in its specially constructed cabinet in St. Mary's Church, Battle.

In addition, Tina is preparing to give presentations about the tapestry to local schools and interested groups; life-sized replicas of the completed tapestry have been printed from the photographic record.