You are here: Home > What's on > Lonestar Comedy Club | Stand-Up 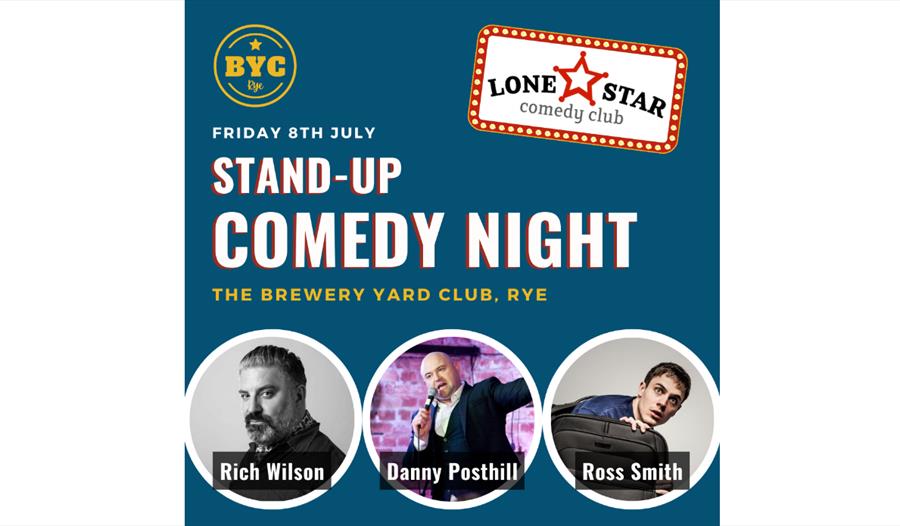 His "tour de force" (Leicester Mercury) performances have earned him a win for Best International Guest at the 2016 New Zealand Comedy Awards, followed by a sell out run in 2017 which saw him nominated for the same award again. He's performed at sellout shows at the Edinburgh Fringe, Adelaide Fringe, Melbourne Comedy Festival and the New Zealand Comedy Festival. An extremely in demand writer, Rich Wilson has also contributed on shows for BBC Three, Sky Arts and Channel 4. 'Wilson knows how to deliver.' - Chortle

Ross is your Compere for the evening. He's a regular at London's biggest comedy clubs. In 2018, he made headlines around the world when he agreed to go on holiday with complete strangers, taking the place of another man called Ross Smith. His viral adventure and the aftermath is the subject of his debut Edinburgh show, I Am Ross Smith. "Hilarious and original" - Nish Kumar

Danny Posthill is a comedy impressionist, and his versatile act caters for all walks of life with unbeatable stand up and a string of impressions, such as Alan Carr, Michael McIntyre, Sarah Millican and President Donald Trump, alongside all the other topical political characters of today. Finally, not forgetting Danny's outstanding performance on Britain's got Talent, during 2015, where he reached the Grand Final. Danny is a regular headline act at Comedy clubs across the UK, and has most recently taken his own one man show "That Bloke Who Does Voices" to The Edinburgh Fringe. "The act was great, you're funny, you're good… I like you." Simon Cowell BGT

Doors will be open from 7PM for this event and the comedy is scheduled to start at 8PM. If you've purchased a ticket which includes a meal, you'll receive this in the interval, which will last about 40 minutes. Our hot meals come with 2 options: meat or vegan. For this event, we'll be serving a chicken curry over a bed of white rice. If you have any questions about the ingredients, please contact us.