You are here: Home > What's on > The House of Marcelle

The House of Marcelle 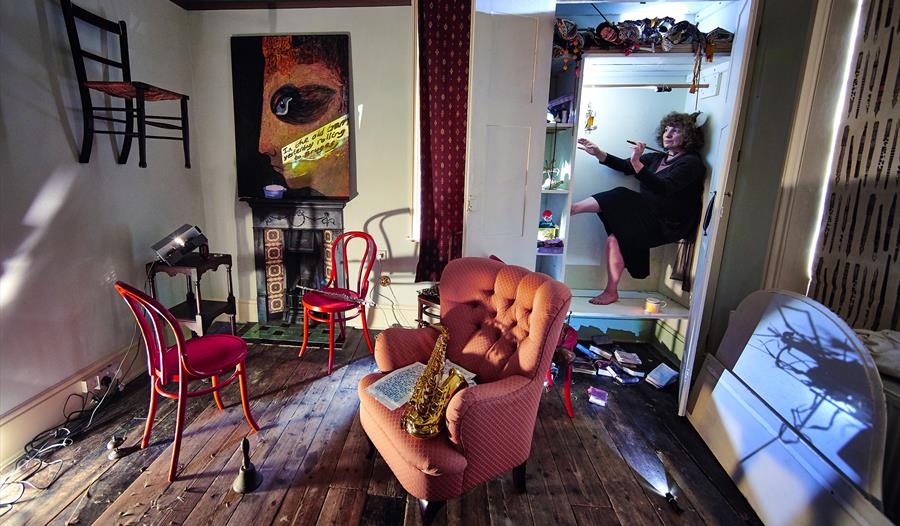 Following on from their acclaimed Windrush production, ExploreTheArch, Sussex's experiential theatre company is back with a hauntingly beautiful inter-European migration story. The House of Marcelle is inspired by the love letters of an extraordinary Belgian painter, Marcelle van Caillie. Marcelle settled in London in 1955, one of many restless Europeans shifting around the continent after the trauma of WW2. The show opens 29th July, running into August.

The House of Marcelle has all the distinctive ingredients of ExploreTheArch's multi-disciplinary work including magical paper forms appearing via pulleys above the audience's heads, and specially composed music played live by musicians just a whisker away from the audience. The unique twist is that the original artworks of this significant, but now forgotten painter, form the backdrop to this promenade performance staged over two floors of the venue, Archer Lodge, in St Leonards-on-Sea.

The show's creator, theatre-maker Gail Borrow, has drawn inspiration from motifs in Marcelle van Caillie's artwork and also the artist's words in her love letters to her British forces sweetheart, a military doctor. She explains, "In all these letters there are expressions of love and uncertainty over whether Marcelle and Henry can actually live together, given their differing nationalities and the fact that Marcelle was already married. This anxiety is interspersed with endearing everyday chatter and wistful evocations of a lyrical life beyond. These love letters are a celebration of finding someone interested in listening, someone who can offer Marcelle a quiet space and encouragement to rebuild her identity which was suppressed by a dominating husband and noisy family." The searching for quiet in a hectic world is one of the many aspects of the story that chimes with life today.

Marcelle van Caillie first rose to prominence in 1941 when, fresh out of art school in Paris, she was given a solo show at the prestigious Palais des Beaux Arts in wartime Brussels. Just 22, she was the youngest woman to be awarded this honour. But life under Nazi occupation took its toll. For Marcelle the brutality was most powerfully symbolised  by the destruction of a beloved wood on her family estate, felled to prevent dissenters hiding there. Later in life Marcelle spoke of ripping tags off the condemned trees.  But she failed to save the four hundred trees she had grown up with and felt closer to than her eccentric, distant parents. This bitter loss imbues her later abstract work, present in the show along with earlier portraits.

The House of Marcelle is an imagined roof over the head of someone who risked everything to grasp a new life in a country that she believed had so much to offer. On the centenary of Van Caillie's birth, the house is filled with the essence of her imaginative and generous spirit - glimpsed through incidents such as the moment a waiter in Paris nips in to see her exhibition adjacent to his restaurant. He is so captivated by her paintings that he asks if he can buy one in instalments, given his meagre salary. Instead Marcelle gifts him the work.

Akiko and Henry Sanford, (Marcelle's second husband and the recipient of the letters) now ninety three, have loaned the Marcelle archive to ExploreTheArch and Sussex for the summer, offering audience members a unique opportunity to view her work at its first public viewing in 30 years. Head to explorethearch.com for further details of The House of Marcelle. Tickets £15, £14 mailing list, under 19s free (must book) available at Eventbrite through the company's website and locally, without a booking fee, at independent bookstores The Bookkeeper Bookshop 1A Kings Road, St Leonards, TN37 6EA and Printed Matter Bookshop, 185 Queens Road, Hastings, TN34 1RG. Tickets for this intimate venue are strictly limited, so early booking advised and advanced booking essential. The performance takes place inside, but the beautiful grounds are open, doors unlocked 30 minutes before the start of the shows at 8pm (matinees 5pm).