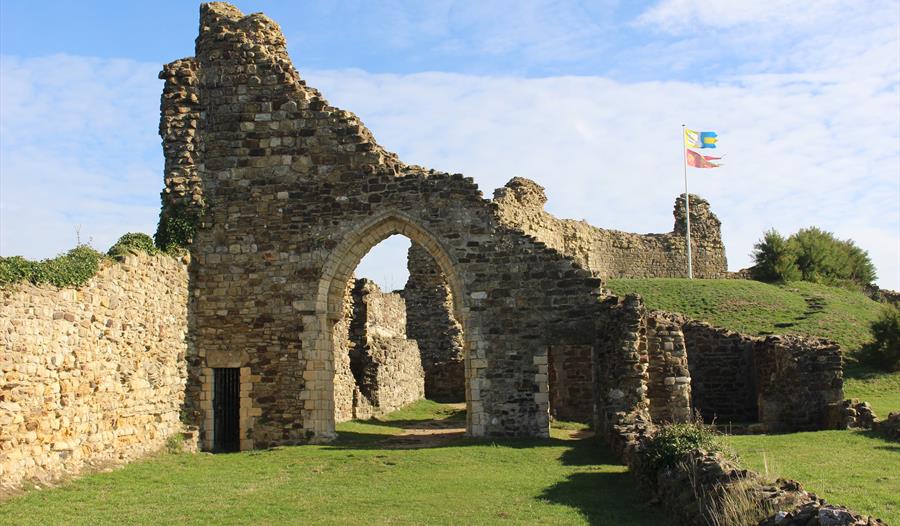 Please check before travelling and book ahead if you can.

The ruins we see today are the remains of a stone fortress (built after William of Normandy's coronation) which was practically impregnable from three sides. Less than half of the original structure remains.

During September 1066, William the Conqueror landed at Pevensey and ordered the construction of a prefabricated wooden castle.  He then moved on to Hastings and erected another.

Hastings Castle was originally a wooden tower built on top of a man made mound or motte, which was surrounded by an outer courtyard or bailey.  The bailey was enclosed by a wooden palisade.  The Norman motte and bailey castle would become a common fixture across England following the conquest.

After the victory at the Battle of Hastings, William was crowned on Christmas Day 1066, and had issued orders that Hastings Castle was to be rebuilt in stone.

William left the castle in the charge of one of his top commanders Humphrey de Tilleul. Around 1069, he gave the castle and the town of Hastings to Robert, Count of Eu, who founded the Collegiate Church of St Mary in the Castle within the castle walls. The remains of this church are the best-preserved part of the ruins.

In 1094 William the Conqueror's son King William Rufus stayed at the castle and during the reign of Henry II much building work was carried out. However, in 1216 King John feared invasion from France and ordered the castle to be dismantled, rather than fall into French hands.

It was restored and rearmed by Henry III in 1225 and later dismantled in the reign of Edward II. In 1272 the Collegiate Church became the King's Free Chapel of Hastings and its Chapel of the Holy Cross became a place of pilgrimage.

Henry VIII finally dissolved St Mary in the Castle at the Dissolution of the Monasteries in the 16th century. In 1591 the ruins became the property of the Pelham family and for centuries the site was used for farming.

In 1824 the 6th Earl of Chichester, Thomas Pelham carried out a full excavation of the castle and during Victorian times it became a tourist attraction. During World War II, an anti-aircraft gun was placed alongside the castle and the steep cliffs were used as a training area for commandos. In 1951 the Pelham family sold the castle to the Hastings Corporation for £3,000.

In 1966 a plaque was unveiled commemorating the Battle of Hastings and on October 14 each year a replica of William's flag, the Gonfalon, is flown from the castle. A popular attraction at the castle today is The 1066 Story - a 16 minute sound and light presentation on the history of the castle and the battle.

Hastings Castle is a fascinating part of history and includes 'The 1066 Story' - an exciting 20 minute audio-visual programme covering the Conquest and the history of the castle through the centuries.

From April to November visit Blue Reef Aquarium, Smugglers Adventure AND Hastings Castle with the super saver ticket saving you 25%! Available to purchase on the door at any of the three locations and valid for seven days. T’s and C’s apply.

Note: Prices are a guide only and may change on a daily basis.