You are here: Home > Things to do > Cliff Railways - East Hill 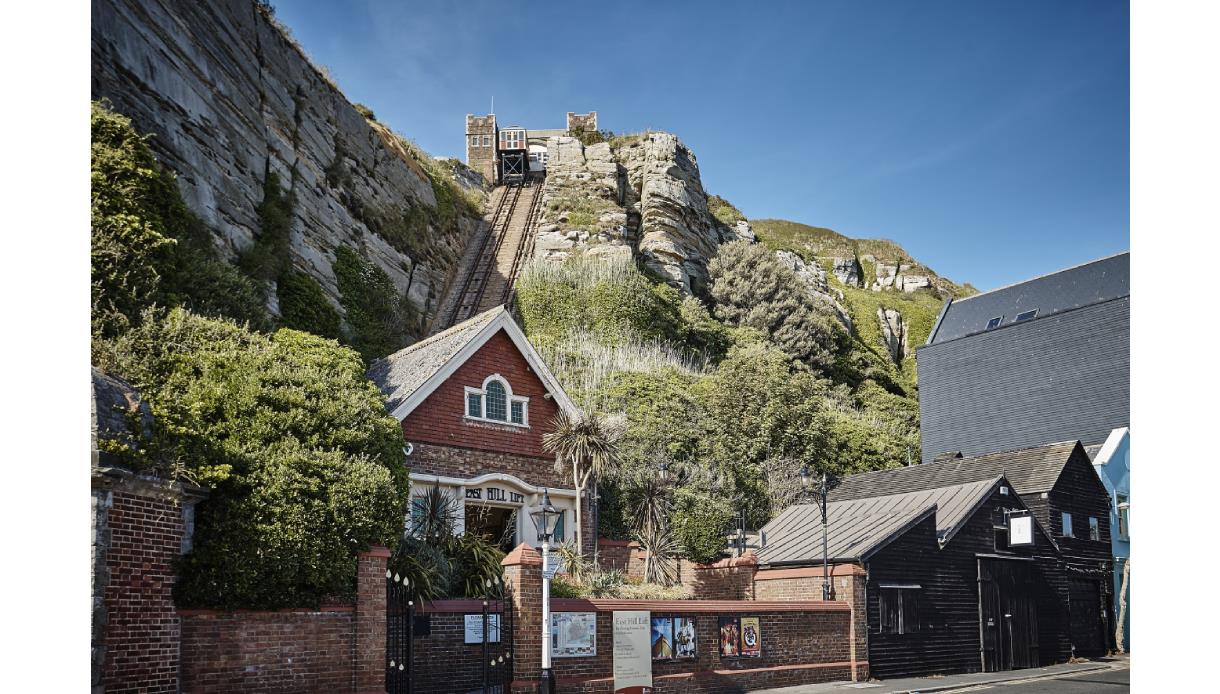 The East Hill lift is closed temporarily for repairs until futher notice.

The United Kingdom's steepest funicular railway is not only a structure of national importance but also a source of immense local pride.

The East Hill Lift provides access to Hastings Country Park which overlooks the Old Town and Rock-a-Nore. It was in the country park that Hastings resident John Logie Baird, the inventor of television, got the inspiration which led to his first TV experiments.

The lift provides views over the Stade, home to the largest beach launched fishing fleet in Europe.

The East Hill Lift has step-free access and a space for wheelchair/prams but is not suitable for larger size mobility scooters.

History of the Railway

Legacy of the Railway

The United Kingdom's steepest funicular railway is not only a structure of national importance but also a source of immense local pride.

It casts a welcoming shadow over Europe's largest beach launched fishing fleet and provides thousands of residents and visitors easy access to the Hastings Country Park and some of the most spectacular vantage points over the town.

It's become an enduring symbol of the unique charm and character of Hastings, a symbol powerful and true enough to withstand two world wars and the fast-changing tides of a turbulent century.

Planning of the Railway

This was fraught with unexpected pitfalls and seemingly insurmountable problems.

Although the town's council successfully bought the land, the original owner, the Reverend Sayer-Milward, had retained a covenant through which he could prevent any construction work.

This setback was quickly compounded by the submission of a major petition from people at High Wickham protesting against any proposed development.

The Council responded with a petition of its own in which 500 residents offered their support for the idea of a cliff railway. This created the impetus for a series of complex negotiations with Sayer-Milward which, after many arduous months, concluded with him granting approval in 1898.

Construction of the Railway

If the Council had found the planning process to be tough, it was nothing compared to the nightmare of the actual construction.

Deep faults in the rocks made it extremely difficult to safely evacuate the shaft and construction workers faced all manner of hidden hazards and perils.

In the Summer of 1902 the opening of the railway had to be delayed because one of the carriages (containing several Council officials) was derailed just fifteen yards from its apex.

Despite all of this, on August 10 1902, the railway finally opened and the first chapter of a one hundred year story had been written.

* The East Hill Lift is currently closed for repairs.