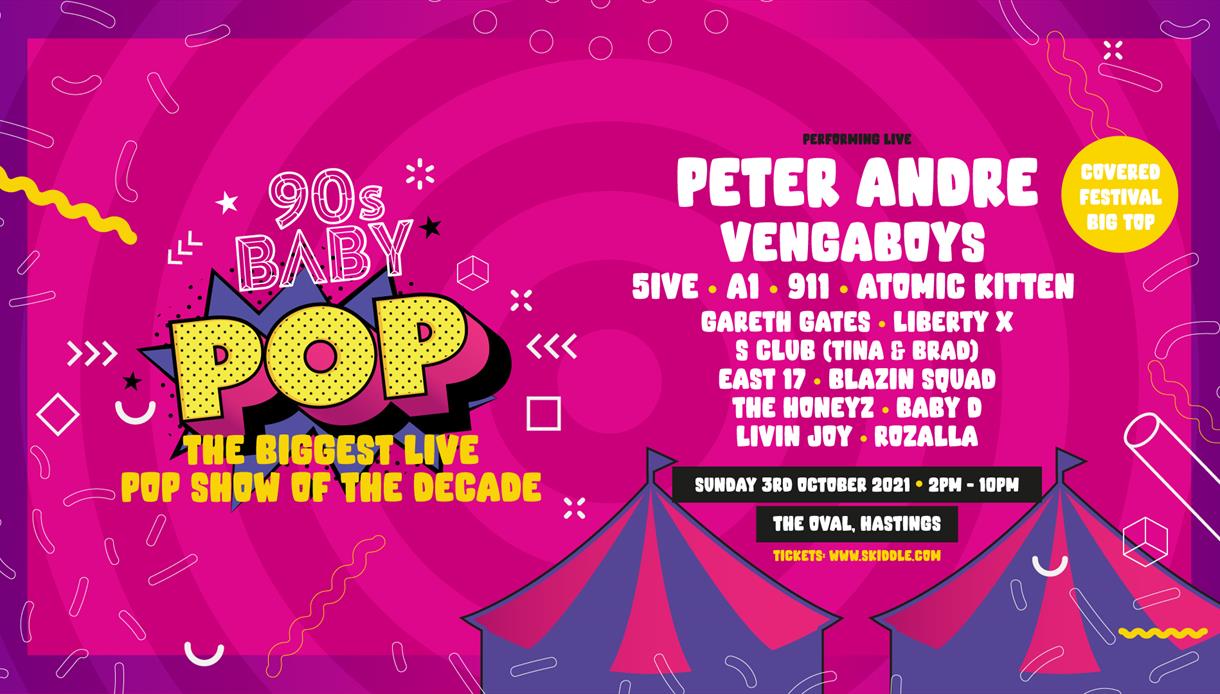 JBM Music is proud to present the ultimate 90s Baby pop event, taking place in Hastings this coming Autumn. A true feel-good celebration led by the sounds of one of music's most legendary decades of all time, '90s Baby' places firm emphasis on a care-free evening of unmatched euphoria, with the popular nostalgia-led brand experiencing a meteoric rise in recent years, selling out various events all over the United Kingdom.

Bringing a truly stellar line-up from everybody's favourite decade, the post-pandemic edition of 90s Baby – set to take place under a covered big top on 3rd October – will see Peter Andre greasing up those rippled abs one more time as he performs a simply 'Insania' set, filled with his biggest anthems, from 'Mysterious Girl' and beyond. With the Vengaboys making The Oval go 'Boom, Boom, Boom, Boom!', this glittering ensemble will also include heart-throb boy-bands, 5ive, A1, and 911.
Chart-toppers Atomic Kitten will be in attendance to remind the rabid crowd of their original lyrics to 2018's viral anthem 'Southgate, You're The One', whilst Pop Idol finalist Gareth Gates will be keen to remind everyone why he was once the nation's ultimate spiky-haired sweetheart. With further performances from 'Popstars' runners-up Liberty X, and East 17, Tina and Brad will also be out to prove why there's no party like an S Club party. Rounding off the dynamic and star-studded cast are all-male posse Blazin' Squad, as well as The Honeyz, Baby D, Livin Joy, and Rozalla, who will be sure to perform the ultimate 90s anthem 'Everybody's Free (To Feel Good)'.
With this one sure to sell out in record time, tickets for the biggest pop party of the decade are seriously HOT tickets! Grab yours ASAP to avoid disappointment and join us in October for a mesmeric day of 90s Baby action by the idyllic setting of theHastings sea-front!