You are here: Home > What's on > Quentin Blake: We Live In Worrying Times 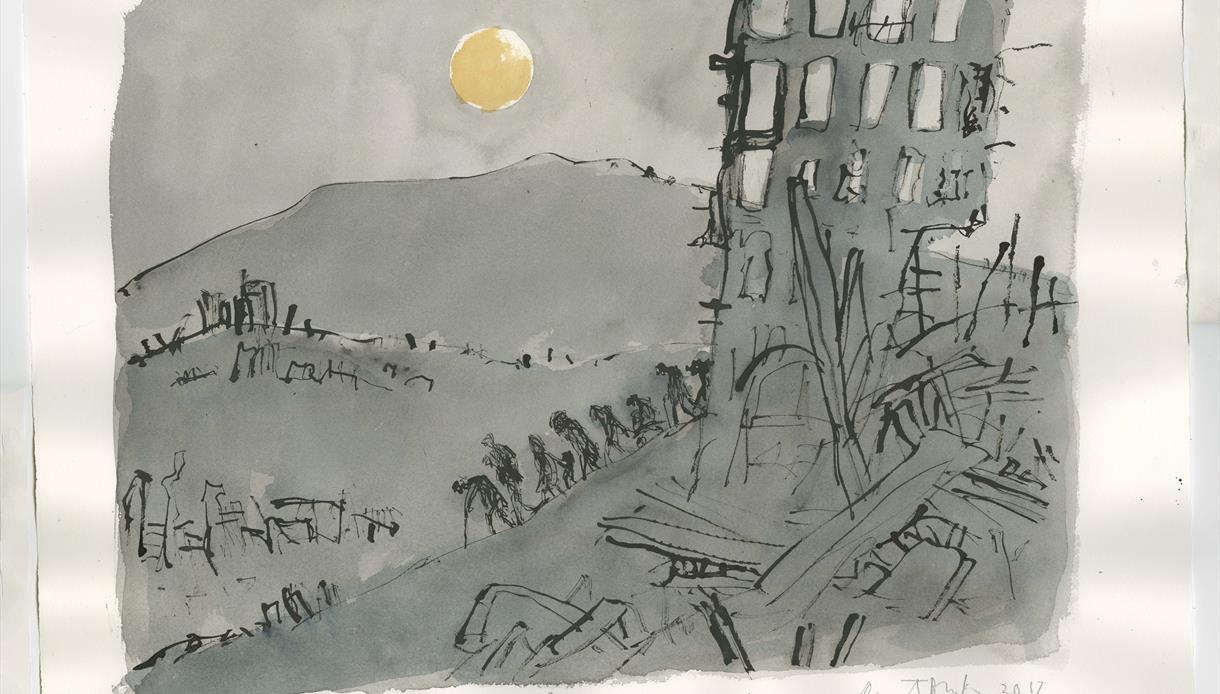 Sir Quentin Blake returns to Hastings Contemporary with a prophetic show of new drawings, paintings, and a large-scale mural he has described as 'his Guernica', as raw, original and unlikely as anything he has produced in his eight decades of artistic creativity. You can view the work online now, or by robot tour, as well as physically in the gallery after lockdown ends.

Earlier this year, Blake began energetically producing a new body of work themed around concern for the state of the world. The resulting exhibition was due to open at Hastings Contemporary over Easter and was later postponed due to the coronavirus pandemic. Many themes from the show have a marked resonance with the present global situation.

We Live in Worrying Times captures the artist at the heights of creative productivity. A tableau of multiple different series of works, the exhibition witnesses Blake exploring subject matter and techniques that feel both familiar and radically different, somewhere between the dream-like and profoundly introspective, and evoking palpable feeling for the state of the world. Displaced figures rove across empty landscapes blasted by war, or ecological crisis; sinister planes and drones haunt the skies above; and dense crowds of closely-cropped portraits – a renewed interest for Blake – appear on the gallery walls, a host of assorted refugees, travellers, orphans, 'unfortunates', and some grotesques Blake has called 'eroded heads'.

At the centre of the exhibition is The Taxi Driver, a thirty-by-five foot mural, completed by Blake in a single day at Hastings Contemporary, that pays homage to Picasso's Guernica, transposing its anti-war sentiment to the present day. Blake was inspired to create the work after a fateful encounter with a taxi driver in London several years ago, who – lamenting that 'we live in worrying times' – encouraged Blake to take up the mantle of artist-hero and produce a new Guernica for the world, an outcry against the encroaching global disasters of the near future. The encounter felt like a dream to Blake; he asked for the taxi driver's name so that he could let him know what happened, but the taxi driver replied that wasn't necessary as he "kept an eye on everything anyway".

With his fluid, energetic approach, We Live In Worrying Times captures the vitality of human feeling, exploring modern life and the creative mind in his distinctive and powerful style.

Sir Quentin Blake is the first Artist Patron of Hastings Contemporary, and regarded by many as one of the world's greatest artists and illustrators. Blake has a long association with Hastings (his house in Hastings Old Town is only a short hop from the gallery) and he has been a high-profile supporter of Hastings Contemporary ever since it first opened to the public in 2012 as Jerwood Gallery. As his very own seaside home-from-home, Hastings Contemporary has created dedicated space for showing Quentin Blake's artwork that can be enjoyed all year round as part of the gallery's diverse exhibitions programme, with several new, bespoke shows of his work opening each year.

Previous shows have included Moonlight Travellers, Dedicated Readers, Feet in Water, Airborne, and The Only Way to Travel, the artist's biggest ever UK show, bringing 100 pieces to our ground floor gallery space. For Sir Quentin, collaborating with Hastings Contemporary has opened up new possibilities in his work, prompting him to explore new approaches and themes – such as migration, mental health, and other aspects of our lives – in the knowledge that the results will find themselves "sympathetically shown in this extraordinary gallery … They are truly pictures for Hastings Contemporary."

Robot tours of the gallery

A telepresence robot, developed by Double Robotics, allows visitors to enter the gallery space from the comfort of a sofa, bed or kitchen table.
Four free tours are available each week, lasting 30 minutes – find out more here.